Speak of the Real Authors of the War

Each episode of the Democratic Republic of Congo’s long-running civil war has weighed particularly heavily on women, yet women have relatively little voice in the negotiations for peace.

The renewed fighting that broke out in August 2008 between the National Congress for the Defence of the People (known by its French acronym, CNDP) and the DRC’s army and allied militias has again exposed Congolese women to displacement, death and widespread sexual violence.

As director of the Society of Women Against AIDS in Africa in the DRC, AimÃ©e Mwadi Kady conducted a study of the effects of pervasive sexual violence in the eastern DRC.

Katana GÃ©gÃ© Bukuru set up the organisation Solidarity of Activist Women for Human Rights, which trains women to defend their rights.

Both women are active in local and regional efforts to bring peace to the DRC. They are also advisors for the Global Fund which supports women’s organisations working on human rights issues, including gender-based violence and peace building.

They spoke to Inter Press Service (IPS) in Cape Town during the November 2008 conference of the Association of Women in Development; part of the interview is published here. 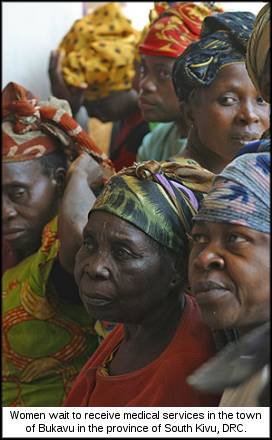 IPS: I’ll begin with a broad question - what’s the situation for women in the DRC now?

AIMÃE MWADI KADI: The situation for women in Congo is not good. Poverty has a woman’s face. Women living in urban areas used to have things a bit better, but with the war, poverty has left the countryside and come into town.

Women face great difficulties. There are more women living alone, more people living in women-headed households. There are growing numbers of young mothers, that is girls becoming mothers very early and becoming a further burden on their own mothers as they still live at home. This has been made worse by the war.

There is a lot of internal displacement; women who have left conflict zones to squat in the urban centres face great difficulties. They work hard to survive.

IPS: Who gives assistance or support to these women?

KATANA GEGE BUKURU: It’s primarily the feminist movement, women’s organisations that are trying to bring together women to share in the struggle.

Women are deeply involved in the search for peace and some have participated directly in the negotiations, while the majority of women have participated indirectly by sending petitions, sending memos, staging demonstrations. Even now when the war has started again, women continue to organise.

IPS: Do women’s organisations have contact with the various parties in the war?

KATANA GEGE BUKURU: In terms of local negotiations and diplomatic efforts, we’ve had small meetings with the different armed groups, but not summits. We’ve met with some local leaders who were open to our vision of peace, but it’s not easy. Sometimes a person tells us, No, we’re not for war, but on the other hand if his leader/patron insists, it’s difficult.

We know the actors that we see on the ground, but those who are behind the scenes we don’t know. That’s the problem.

IPS: What do you think of the role played by the UN mission, MONUC, at the moment?

KATANA GEGE BUKURU: I can say that even if they play a positive role and even if they are part of the call for a ceasefire, what really stands out at the moment is this: why is the war continuing while they’re here?

AIMÃE MWADI KADI: MONUC is an institution put in place to keep the peace. Now, I often work in the zones where there is war. I’ve been in Goma, in Kiwanja, Tamugenga, Rumangabo, all these places. But in the villages, what are people saying? “No Nkunda, No Job, No Money.”

That is to say, in some places MONUC has also played a role that I can say is negative, because I have spoken a lot with women in the course of my work supporting women who are victims of violence. And everywhere, this is what they told me: they say, No, the war will start again because MONUC’s members are finding their satisfaction in it, because they are well-paid. If there was no war, they wouldn’t have any money.

No job, and no Nkunda (leader of the CNDP). No job, no money.

So it’s very important, at this juncture, to speak the truth. People must understand that MONUC has also played a role in the return to war.

KATANA GEGE BUKURU: What I’ve got to say is that everyone’s using the name of Nkunda. Nkunda is just an individual. An individual cannot make war on his own. Nkunda is the image, so we don’t want to continue to talk about Nkunda, but to speak of the real authors of the war in DRC.

IPS: And who are the real authors?

KATANA GEGE BUKURU: That’s what we want to know! Because an individual can’t make war alone. He doesn’t make weapons. Nkunda doesn’t have sufficient means to carry out a war. It’s not him - that’s why we want to know who the authors are.

IPS: It seems that the same solutions are always put forward. There’s always an ex-president called on to mediate, always the search for suitable soldiers for a peace-keeping mission where there is no peace to be kept. What other approaches would you propose?

AIMÃE MWADI KADI: Pertinent question. Let me propose a solution. Because we always pretend that the FDLR, the ex-Rwandese army is in Congo causing insecurity for Rwanda.

But, my brother, Rwanda has - the DRC was divided in two for how long? For three years, the DRC was divided, and they [Rwanda] had all the time they wanted to sweep out, even massacre them, to kill all the FDLR even to the last baby. But they couldn’t.

The solution - the international community has to take charge… Because they are asking the DRC to disarm the FDLR, but how? Demobilise them - with what means?

Let the international community find a place. We’re not insisting they go back to Rwanda and take part in a dialogue like we had in Congo.

We sat down around the same table, we even accepted people from outside the DRC who today we find in high positions in Kinshasa.

All this to say that we Congolese are pacifists. People said, We want peace. Now together, let’s build it, forgetting our differences.

But today Nkunda says I’m going to fight until the FDLR is gone from DRC. They’re fighting because the FDLR is supposed to be preventing Rwanda from developing? That’s mad.

And then we’ll show you peace. We constantly pretend that the FDLR is the reason [for the conflict]. But the reason for war is theft.

Go to Rwanda now, they’re busy constructing the country. With what? Rwanda is selling diamonds now, signing contracts to sell diamonds, and you ask yourself: where do the diamonds come from?

Go to Kinshasa; there are so many amputees. Mothers, young people. When we speak with Rwandan women, they are also crying, because so many of their children have come to die in DRC.

So my final word on this is that the solution is not to continue to say to the DRC that we have to arrange to disarm, no. It’s the international community which has been complicit that must take on the task.

If not… we will all take up arms.

That’s what we’re preparing here if you leave us like this, abandoned, to our own sadness.

This post is helpful with an analysis I am doing for a specific group of people. Do you have any other articles to suggest on this topic? Thanks.

This is a terrific article, and I would like more information if you have any. I am fascinated with this topic and your post has been one of the best I have read.